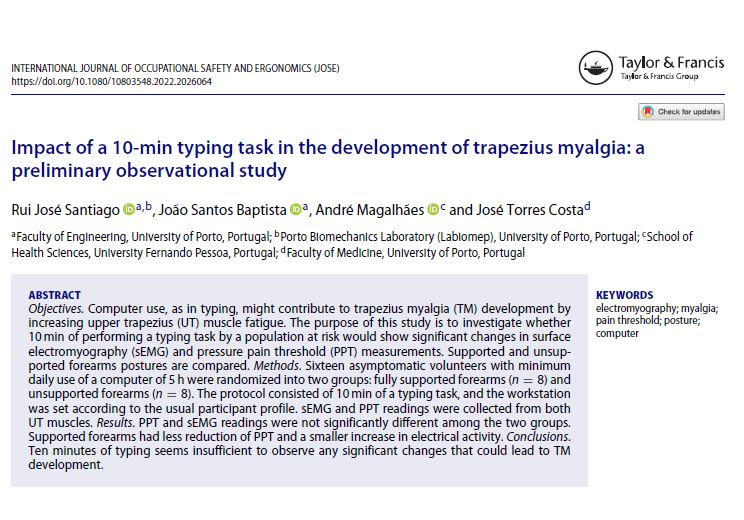 Impact of a 10-min typing task in the development of trapezius myalgia: a preliminary observational study

Click here for link to the published article page

Computer use, as in typing, might contribute to trapezius myalgia (TM) development by increasing upper trapezius (UT) muscle fatigue. The purpose of this study is to investigate whether 10 min of performing a typing task by a population at risk would show significant changes in surface electromyography (sEMG) and pressure pain threshold (PPT) measurements. Supported and unsupported forearms postures are compared.

Sixteen asymptomatic volunteers with minimum daily use of a computer of 5 h were randomized into two groups: fully supported forearms (n = 8) and unsupported forearms (n = 8). The protocol consisted of 10 min of a typing task, and the workstation was set according to the usual participant profile. sEMG and PPT readings were collected from both UT muscles.

PPT and sEMG readings were not significantly different among the two groups. Supported forearms had less reduction of PPT and a smaller increase in electrical activity.

Ten minutes of typing seems insufficient to observe any significant changes that could lead to TM development.