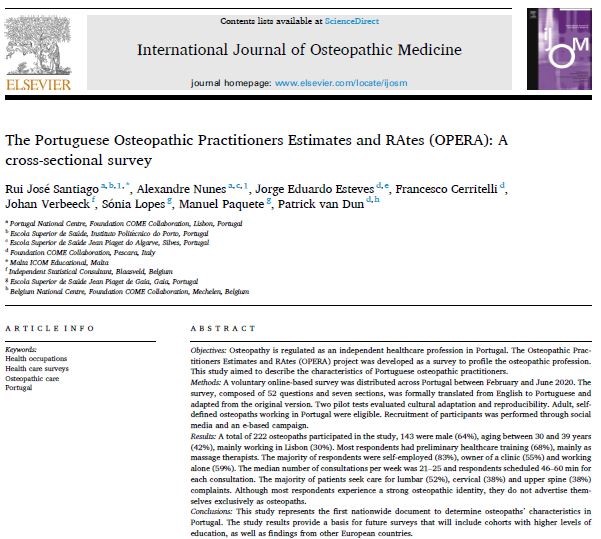 Click here for link to the published article page

Osteopathy is regulated as an independent healthcare profession in Portugal. The Osteopathic Practitioners Estimates and RAtes (OPERA) project was developed as a survey to profile the osteopathic profession. This study aimed to describe the characteristics of Portuguese osteopathic practitioners.

A voluntary online-based survey was distributed across Portugal between February and June 2020. The survey, composed of 52 questions and seven sections, was formally translated from English to Portuguese and adapted from the original version. Two pilot tests evaluated cultural adaptation and reproducibility. Adult, self-defined osteopaths working in Portugal were eligible. Recruitment of participants was performed through social media and an e-based campaign.

A total of 222 osteopaths participated in the study, 143 were male (64%), aging between 30 and 39 years (42%), mainly working in Lisbon (30%). Most respondents had preliminary healthcare training (68%), mainly as massage therapists. The majority of respondents were self-employed (83%), owner of a clinic (55%) and working alone (59%). The median number of consultations per week was 21–25 and respondents scheduled 46–60 min for each consultation. The majority of patients seek care for lumbar (52%), cervical (38%) and upper spine (38%) complaints. Although most respondents experience a strong osteopathic identity, they do not advertise
selves exclusively as osteopaths.

This study represents the first nationwide document to determine osteopaths’ characteristics in Portugal. The study results provide a basis for future surveys that will include cohorts with higher levels of education, as well as findings from other European countries.